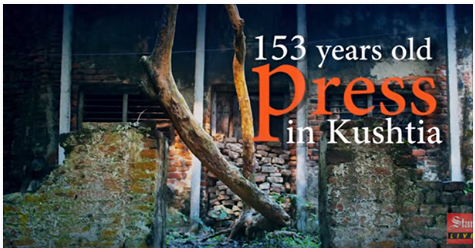 More 150 years ago, the elite Bangalis involved in industrial production of indigo used to treat the farmers and workers inhumanely. During that time, Kangal Harinath Majumder, an employee of a British-owned indigo production factory, witnessed the cruel manner how the workers, who sacrificed their sweat and blood, were being exploited by the zamindars and the British Raj.

Harinath never forgot what he saw, and left the job to start teaching students at his small village in Kushtia. It was then that he decided to wage a war against such atrocities in his own way— by publishing news in his own newspaper.

With the help of a loan and his savings, he founded his own publishing house in Kumarkhali of Kushtia in 1863 and started publishing news against such oppression in his weekly Bangla publication, Gram Barta Prokashita.

This has essentially made Kangal Harinath Majumdar the first Bengali investigative reporter, and Gram Barta Prokashika can be heralded as the first Bangla language newspaper that directly attacked the imperialists and the zamindars.

Renowned author Mir Mosharraf Hossain wrote part of his classic novel Bishadshindhu inside this press building in Kumarkhali. In fact the novel and Lalon’s songs were also first published in Gram Barta Prokashika.

Amazingly, the press Harinath had built still works today! If you go there in Kushtia, you will find the press building in a very shabby condition, but inside, the 150 years old printing press remains intact with the printing blocks and pages printed that date back to the 19th century!

The news publications of the 19th century were printed in hand-driven press machines. The alphabets would be arranged in a frame and then printed on paper. It would take hours for the ink to dry and probably a day to print a small publication.

Three workers were required to print a single page; one person would arrange the alphabets in the correct form in a dais, another would place single pages on the dais and apply pressure on the press machine to print the letters, and the third person would dry the pages after they were ready while someone else would bind them to form a whole publication.

It is difficult to even imagine such an arduous process in our digital age.

According to his descendents who live in the adjacent premise, the press can still print 300 pages a day and this kind of printing machine may not be found elsewhere in the country.

But like the building itself, the press is rotting due to lack of finance. Each time there is rain, the press becomes damp from the leak in the ceiling.

Recently the government allocated a budget of Tk 6 crore to build a museum in Kumarkhali to preserve the press.

But Harinath’s descendents who have been struggling to maintain the press with whatever resources they can are not comfortable with the government’s plan.

The fifth generation of Kangal Harinath, Debashish Majumdar says, “We are happy that government has taken this museum project. But I think the museum should be here in Kangal Harinath’s press building.”