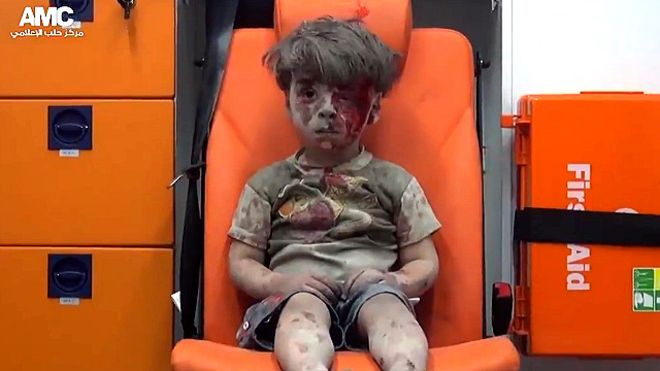 A photograph of a dazed and bloodied Syrian boy rescued from a destroyed building in Aleppo after an air strike has caused outrage around the world.

Images of the boy sitting in an ambulance were released by activists and have since been shared widely on social media. He was identified as five-year-old Omran Daqneesh, who was treated for head wounds on Wednesday, doctors said. His parents and three siblings are believed to have survived the attack.

The pro-opposition Aleppo Media Centre said the pictures of Omran had been taken in the rebel-held Qaterji district late on Wednesday, reportedly following Russian air strikes that killed at least three people and injured 12 others.

The video shows the boy being carried out of a damaged building by a medic and then placed on a seat in the back of an ambulance, covered in dust and with a blood-covered face.  Omran is then left sitting quietly, appearing stunned by the ordeal. He runs his hand over his face and looks at the blood before wiping it on the seat.

Omran’s picture has already led to comparisons with another disturbing image, that of three-year-old Syrian refugee Alan Kurdi whose body was washed up on a Turkish beach after his family attempted to cross to Greece.