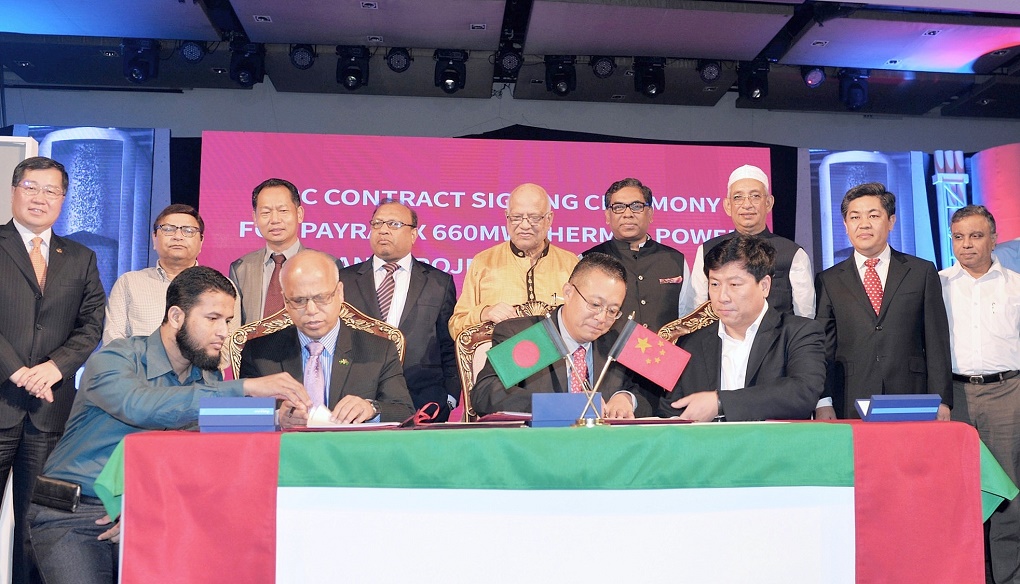 The 1320-megawatt Payra coal fired thermal power plant – a Bangladesh-China joint venture – is being installed just beside one of the most important Hilsa sanctuaries on the Andharmanik river in Patuakhali district, according to the Power Division of Bangladesh. Another important sanctuary in Tentulia river is located about 10 kilometres upstream of the project site. These two sanctuaries alone produce around 10,000 metric tonnes of Hilsa, annually. Currently, five river spots are declared as Hilsa sanctuaries in Bangladesh.

“Such a heavy industry will obviously create negative impact on Hilsa in the rivers, if the authorities do not ensure proper environmental management,” said Niamul Naser, a professor at Dhaka University’s Zoology Department.

In addition, the transportation of coal through the Golachipa river which is the major Hilsa upstream migration route located adjacent to the plant might cause harm to the fish.

The fishermen dependent on the Andharmanik river are also assuming that the plant will create a negative impact on Hilsa.

“We heard that the power plant is being built at the edge of the Andharmanik river. The plant is good for the country but we might lose fish in the river due to the hot water released from the plant,” said Rasul Khan, a fisherman from Nilganj village, located near the site of the plant.

However, the Environmental Impact Assessment report says that “ultra-super critical technology” will be used in the joint venture power plant. It states, “The plant will use Closed Recirculating System with Cooling Tower required quite a low blow down, which will have to be routed back to the river. Hence, addition of blow down water that is being routed to river by mixing the blow down water with fresh water is not required.”

Jahid Habib, the project director of the Jatka Conservation and Alternate Income Generation for the Jatka Fisheries said, “The power plant authorities told us that they will take water from the river but will not release hot water to the river”.

This did not fully reassure him, and he feared that some chemicals would undoubtedly be released into the river, affecting the fish.

The state minister for power, energy and mineral resources, Nasrul Hamid told thethirdpole.net that the project authorities would obviously take measures to reduce risks. Syed Nazmul Ahsan, a director in the department of environment who is responsible for issuing environment clearances for any development project in Bangladesh, echoed the same remarks.

“We issued environment clearance to the project after being satisfied about their environmental management plan for the power plant,” he said.

Hilsa fish and its production

The coal fired thermal power plant, to be established near the sanctuary, is a joint venture initiative of Bangladesh and China. Bangladesh’s state owned North-West Power Generation Company Limited (NWPGCL) and China’s National Machinery Import and Export Corporation (CMC) are jointly building the power plant. The project will be implemented on a 30:70 equity:debt basis, which means NWPGCL and the CMC will have to provide 30% of the total project cost and will have to mobilize the remaining 70% from international sources. The plant will be built in Kalapara, in Patuakhali district, on 397 hectares (3.97 square kilometres) of land.

The power plant is part of a larger drive to provide electricity to the power-starved country. According to the Power Cell at the ministry of power, energy and mineral resources, Bangladesh’s highest electricity generation capacity is 12,365 MW but it actually produces only 9036 MW/day, while the demand per day is 10,000 MW. About a quarter of the population does not have access to electricity.

There is a space for renewable energy as well, but the various initiatives, both public and private, are calculated to only add a paltry 500 MW.

Apart from financing for Payra, two other large-scale Chinese investments are in the pipeline in Bangladeshi energy sector. An agreement has been signed between Bangladesh and China’s Huadian Hong Kong Company Limited to build a 1320 MW coal fired power plant. While another 1224 MW Bangladesh-China joint venture, the Banshkhali power plant, has faced protests by locals against its land acquisition.

This is a private venture between the Bangladeshi S Alam Group and China’s SEPCO-3 Electric Power Construction Corporation. At least five people were reportedly killed when the police opened fired on the public agitation procession.

Given Bangladesh’s energy needs, the building of power plants will continue, but it may also be at the cost of both human lives and the environment, if not handled properly.