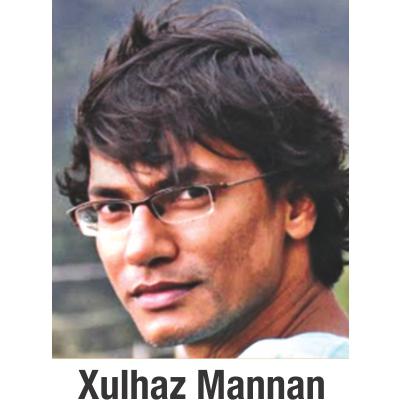 Some important documents left behind by the killers of Xulhaz Mannan and his friend Mahbub Tonoy include a list of targets, police said.
Though the list does not bear any name, the documents say the targets are any individuals or professionals like teachers, students, lawyers and physicians who are giving “false interpretation of Islam, Allah and the prophet”.
Ansar al Islam, which claims to be a local branch of al Qaeda in Indian Subcontinent (AQIS), claimed responsibility for the double murder.
At least seven assailants took part in the operation, and one of them left behind a backpack during a tussle with a police officer who tried to nab him in vain.
The bag contained some documents, a firearm and some bullets, among other things, according to investigators.
Quoting the documents, a top DB official said any individual atheist or LGBT (lesbian, gay, bisexual transgender) is not their target. Rather those who promote such a cause will be their target.

Xulhaz, a USAID local staff member and also editor of the country’s only known LGBT magazine Roopbaan, and his friend Khandaker Mahbub Rabbi Tonoy were killed by a group of unidentified assailants armed with machetes and firearms inside Xulhaz’s Kalabagan apartment on Monday afternoon.
The Detective Branch of police has been given the charge of probing the killings.
As part of the probe, investigators have started scrutinising the CCTV footage collected from nearby buildings and other evidence found so far.
“We’re giving more focus on ABT [Ansarullah Bangla Team] as the nature of the attack suggests its involvement in the killings,” said the official, asking not to be named, citing ongoing investigation.
Meanwhile, Dhaka Metropolitan Police Commissioner Asaduzzaman Mia yesterday said they would be able to crack this murder case.
He claimed regular crimes like theft, robbery and mugging were under control.
“I don’t want to term it a failure [that police could not catch any of the assailants while fleeing]. But it is pathetic that none of the hundreds of people came forward to stop the killers,” he said while describing how the killers fled after injuring a police sub-inspector.
Some misguided youths are trying to create instability in the country for long through such targeted killings, he said, calling on the city dwellers to provide information about any suspicious tenants.
Parvez Mollah, security guard of the building, said seven youths took part in the mission. They were clean shaven and wore identical clothes.
Four of them entered Xulhaz’s flat on the first floor posing as couriers and directly took part in the killings.
Three others took position at the gate. They took Parvez, another guard and the caretaker of the house hostage inside a ground floor room, Parvez told reporters yesterday.
Four youths then followed Parvez to Xulhaz’s flat, forced into it and hacked Xulhaz and Tonoy to death.
Before that, they stabbed Parvez when he tried to stop them from entering the house.
The Daily Star