Home > The Khapra Ward Day: The Moment and the Movement 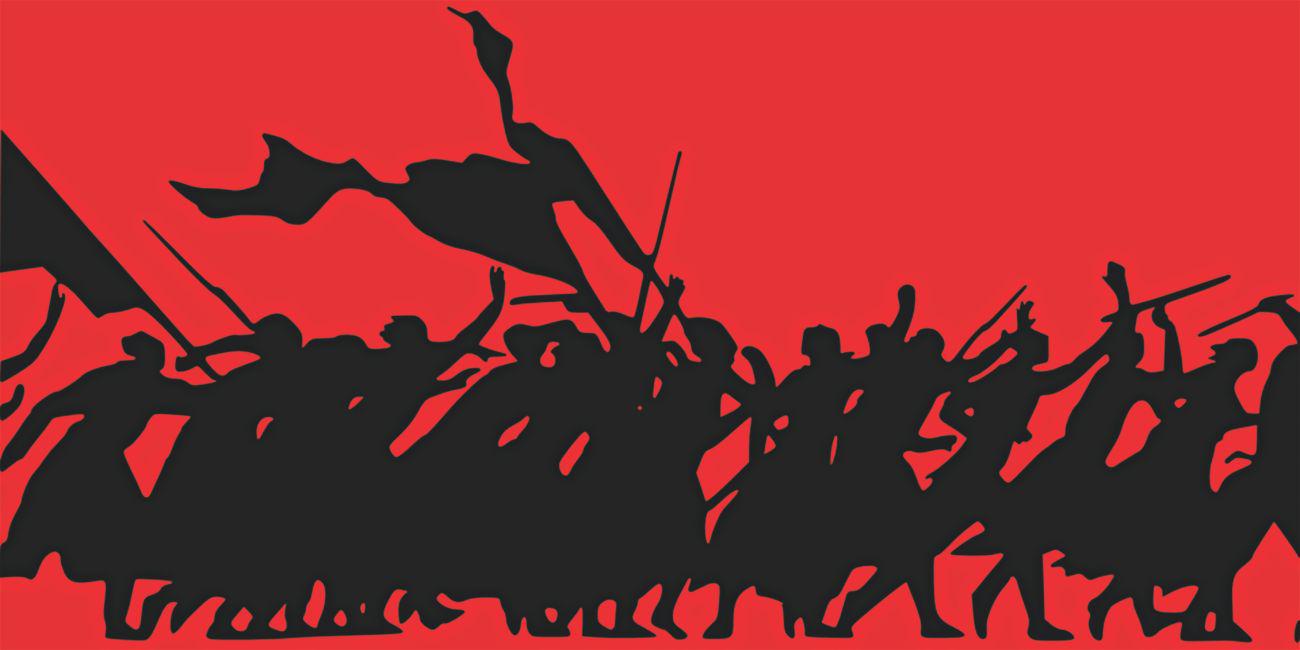 No history is mute. No matter how much they own it, break it, and lie about it, human history refuses to shut its mouth. Despite deafness and ignorance, the time that was continues to tick inside the time that is. —Eduardo Galeano
Who are those? If they are communists they should be shot dead. —A police officer, Rajshahi Central Jail, 1950

April 24, 1950. It was a sunlit Monday morning. There were 39—according to some, 42—political prisoners in the famous Khapra Ward of Rajshahi Central Jail in the then East Pakistan (now Bangladesh). Following the jailor’s order, a group of prison-guards opened fire on those unarmed prisoners. They were then in the middle of a hunger strike, protesting inhuman prison practices that ranged from brutal torture to serving sub-standard food—practices enforced by the Muslim League government of Pakistan. Seven communist leaders—Dilwar Hussain and Hanif Sheikh of Kushtia, Anwar Hussain of Khulna, Sudhin Dhar of Rangpur, Bijan Sen of Rajshahi, Sukhen Bhattacharya of Mymensingh, and Kamporam Singh of Dinajpur—were brutally killed in the firing. Other communist prisoners—except a few—were severely injured.

As the Marxist writer-activist Ranesh Dasgupta tells us, among those killed on April 24, 1950, Kamporam Singh was one of the major leaders of the Tebhaga Movement in Dinajpur, while Dilwar Hussain and Hanif Sheikh were the leading organisers of railway and textile mill workers’ unions and movements in Kushtia and Pabna. Bijan Sen and Sudhin Dhar were the fierce revolutionaries of Bengal’s “Agni Joog,” as it used to be called. Both of them had some substantial experience of serving in prison earlier. Following their imprisonment, they exemplarily devoted themselves to building workers’ organisations and movements. Anwar Hossain and Sukhen Bhattacharya were dedicated student activists, while Sudhin Dhar, after 1947, was in charge of an organisation of railway workers in Rangpur. Indeed, as Ranesh Dasgupta further tells us, all of them—while committed to the idea of communism—were variously linked to the communist party itself. I think their togetherness in the Khapra Ward seemed to be representing a kind of communist alliance among peasants, workers, and students, however temporary it might seem.

Thus, among the left in particular, April 24 is known as the Khapra Ward Martyrs’ Day. But that day is more than a fleeting historical or dramatic moment. In other words, that ‘moment,’ I submit, cannot be seen in isolation from the entire history of our national liberation movement itself. In fact, one can trace the history of our liberation movement even earlier than 1952—at least as far back as 1947-1950. For, to be historically faithful, it was precisely at that post-‘independence’ conjuncture in Pakistan that the initial waves of resistance to its ruling classes came from peasants, from workers, and—however outrageous it may sound to some mainstream partisan historians today—from communists themselves, their internal differences and tactical pitfalls notwithstanding.

Indeed, our standard or official or middle-class historical narratives of the Liberation Movement of Bangladesh—which was by no means a one-off event—both reveal and conceal. Surely they keep revealing the roles of certain leaders and individuals again and again, important and even heroic as they are. But those historical accounts in many instances also remain suggestively silent about the roles of the genuinely oppressed—women, peasants, and workers, among others, for instance. Indeed, without their protracted struggles, their insurrections, their uprisings, and their sacrifices at various levels and various times, Bangladesh would not have come into being as a distinct nation-state in 1971. Indeed, the true protagonists of our Liberation Movement of 1971 were common, ‘ordinary’ people themselves, the majority of whom were peasants and workers.

But, then, there are even other years and other names that also remain virtually or relatively absent in our standard historical narratives. In fact, history-writing itself continues to remain a battlefield of conflicting and competing interests—even a site of the class struggle—while absences, silences, and gaps in the writing of our history are by no means politically and ideologically neutral or innocent.

So, then, do we know who Lutfar Rahman was? Or Mozam Mollah and Fani Guha, for that matter? These names, among many others, take us back to a particularly turbulent period in the history of people’s resistance in the then East Pakistan, a period not often heeded, let alone scrutinised. Lutfar Rahman was a communist activist from Jessore. He was arrested in 1939. He was accused of the ‘crime’ that he used to read and disseminate communist literature. After the creation of Pakistan as a nation-state, Lutfar was arrested again, in 1949. He actively participated in hunger-strikes—then almost generally reckoned an ‘effective’ tactic of resistance by communists—against the oppressive prison-system of Pakistan and by extension, against the Pakistani ruling class. While in prison in 1950, Lutfar Rahman was infected with tuberculosis. Witnessing—and being subject to—the kind of brutal persecution that went on inside prison without any signs of abatement and was particularly perpetrated on his fellow communists, Lutfar went literally insane at one point. Although he was released on July 13, 1950, physically and mentally tortured and devastated as he was, he died at the prison gate itself. Obviously, it was not a natural death but a murder.

And then there was Fani Guha. He was Secretary of the Dhaka District Communist Party. He was arrested in 1949. Because of his persistent participation in hunger-strikes inside jail—there were as many as four hunger-strikes, spanning a total of 181 days during the period between 1949 and 1950, in which communists and left activists participated to varying degrees—his arteries got brutally pierced and thus he died soon after he had been transferred to the Mymensingh jail. Mozam Mollah—who was a fierce militant of the Tebhaga movement in the Narail area of Bangladesh—also died in prison in 1949 because of inhuman police brutality perpetrated on him, while Bishnu Bairagi was beaten to death in the Khulna jail in 1950. Also, women prisoners—communist as they were—were variously tortured. My own former teacher Nadera Begum, who herself was a communist prisoner in the Dhaka Central jail, and who was tortured by the police there (she was released in 1950 and later became a professor in the Dhaka University English department), told us quite a few of those horror stories of torture in prison.

One can surely cite many other examples, while I cannot traverse the entire range of even relevant events here owing to space constraints. But I think the main point comes out clearly: the entire prison system of the then East Pakistan, the coercive apparatus of the post-independence Pakistani ruling class, decisively targeted Bengali communists, left activists, and peasant leaders, who were then perceived to be the most dangerous enemies of Pakistan. Many of them were even called or considered “deshodrohee” (treacherous to the country), for instance. Motiur Rahman’s 2015 book called Khapra Ward Hottakando 1950 [Khapra Ward Killings 1950]—well-researched as it is—calls attention to an official press note that explicitly described or declared the communist revolutionaries in 1950 as “deshodrohee,” or as anti-Pakistan elements to be eliminated.

Indeed, what the communist prisoners did in 1949-1950 cannot be simply reduced to a case of adventurism and thus glibly or quickly dismissed as a total failure, although there were certain elements of adventurism of which one might be critical. As Salud Algabre, the feminist leader of the Sakdal rebellion in the Philippines, once memorably put it, “No uprising fails [in the final instance]. Each one is a step forward.” And what the communist inmates did inside various prisons in the then East Pakistan—particularly in Rajshahi Central Jail, where police brutalities and physical torture assumed unparalleled proportions—can be seen as an organised movement in its own right. Owing to space constraints again, I intend to make only a few general points about this movement here.

In the first place, the movement of the communist prisoners—by organising hunger strikes in almost headlong succession—repeatedly resisted inhuman prison conditions, which themselves were seen as examples of organised state violence. For the communists, prison itself turned out to be an explosive site of class struggle. Some works—particularly Badruddin Umar’s Purbo Banglar Bhasha Andolon o Totkalin Rajneeti [The Language Movement of East Bengal and Politics at the Time] and Abdus Shaheed’s Kara Smriti [Prison Memoirs]—memorably depict the notorious prison conditions prevailing at the time in the country. In this instance, the organised communist resistance—the first one of its kind—to the coercive apparatus of Pakistan amounted to resisting the very state of Pakistan which was found to be oppressive by and large.

But the larger significance of the Khapra Ward movement, I think, resides in the fact that the communist prisoners derived their energy and inspiration from at least 4 remarkable peasant movements—the Tebhaga Movement (1946-47), the Tonko Abolition Movement (1946-50), the Nanakar Abolition Movement (1920-50), and the Nachol Movement (1949-1950)—movements that of course decisively and exemplarily underlined the land as the site of the class struggle for the toiling masses. But some of the demands advanced by those peasant movements remained variously unmet even after the independence of Pakistan in 1947.

Thus it was strategically clear to the communists at the time—and they were among the first ones to have immediately realised—that the independence of Pakistan was a fake one, and that the state of Pakistan was an undemocratic, feudal, militaristic, colonialist, and pro-imperialist at the same time. And they wanted to dismantle this state in favour of the emancipation of peasants and workers. It is true that the organisations of the communist party were getting increasingly strong and gathering remarkable momentum in East Bengal between, say, 1937 and 1947. But later on, many, if not all, communists in East Bengal turned to the path of the armed struggle—inspired particularly by B.T. Ranadeev of the Communist Party of India, for instance—without, however, adequately considering their mass-bases and the strengths of their opponents, among other issues. The prices the communist movement had to pay subsequently were enormous, to say the least.

The above topic itself calls for an extended engagement into which I cannot go now. But—regardless of their tactical pitfalls and the degree of their detachment from the people themselves—the Khapra Ward communist prisoners, among other prisoners of course, at least clearly provided the message that the Pakistani ruling class would not go unchallenged by any means. It was a beginning of sorts. It marked the beginning of anti-Pakistan resistance. It’s not for nothing that the Khapra Ward prisoners subsequently served as an inspiration to the left, and that they were remembered fondly and respectfully by a lot of freedom-fighters during the Liberation War of Bangladesh, people’s war as it was.

The Khapra Ward communist prisoners—in their own ways—also fought in advance, so to speak, for the three announced principles—I call them “revolutionary” principles—that later guided our national liberation movement in 1971, for instance: equality, justice, and dignity. As long as these three fundamental principles remain relevant—and indeed they remain relevant, given that the majority of the people in our country, including women, peasants, workers, and minorities, have not yet achieved their economic, political, and cultural freedom in our country—the Khapra Ward communist prisoners remain with us in the history of our struggles against all forms and forces of oppression and exploitation.

The writer is Vice-President of US-based Global Center for Advanced Studies and Associate Professor of Liberal Studies/Interdisciplinary Studies at Grand Valley State University in Michigan, while he is currently Scholar-in-Residence at the University of Liberal Arts-Bangladesh (ULAB).He writes in both Bangla and English.