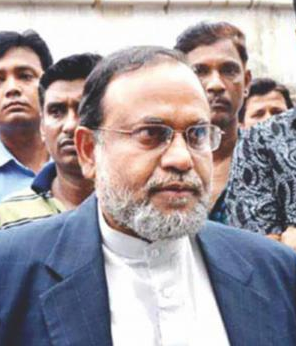 The city of Chittagong was caught up in the horror of his ruthless actions against Bangalees 46 years ago.

It was during the Liberation War in 1971 when he operated Al-Badr torture camps like those set up by the Nazi in World War II.

His militiamen picked up freedom fighters and pro-liberation people from different areas of Chittagong and tortured them brutally at those centres. Many of the captives were killed and the bodies were dumped into the Karnaphuli.

Mahamaya Dalim Hotel, headquarters of Chittagong Al-Badr, was virtually a “death factory” and he was “an indispensable cog in the murdering machinery” installed there.

Third-in-command of Al-Badr in 1971, he was one of the most notorious collaborators who committed the most heinous crimes against humanity during the nine-month war.

Their conspiracies and brutalities, however, could not stop the birth of Bangladesh. The Pakistan occupation forces surrendered on December 16, 1971 and like many other collaborators, Quasem went into hiding.

But after the changeover in 1975, he re-emerged with a new mission. He reorganised Islami Chhatra Sangha (ICS), which according to court documents had turned into Al-Badr, the infamous killing squad, in 1971.

He later joined Shibir’s mother organisation Jamaat-e-Islami and played the leading role in ensuring cash flow to the party by building a financial empire in independent Bangladesh.

Finally, he was arrested on June 17, 2012, at the office of the daily Naya Diganta, a concern of Diganta Media Corporation, of which he was chairman.

Quasem, 63, is the sixth war criminal and fifth Jamaat leader to have been hanged for war crimes.

Around 12:30pm, three ambulances, including the one with Quasem’s body, left Kashimpur jail and headed to Manikganj under police escort.