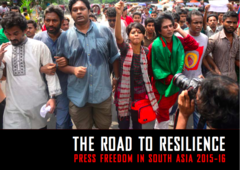 In the period under review (May, 2015 to April, 2016), 31 journalists, bloggers and media workers were killed. India is emerging as one of the most dangerous countries for journalists as is Bangladesh with an ongoing trend of violent attacks against bloggers.

“Tackling South Asia’s poor record on impunity for crimes against journalists will take more than strong words. For those fighting impunity, the price can be high but there have been positive signs with some arrests and convictions,” the IFJ said.

This year’s report features country reports from the region as will as situation reports on trouble spots and emerging issues, including the current deadly climate facing Bangladeshi bloggers, media freedom struggles in Chhattisgarh state in India as well as Kabul and Kunduz in Afghanistan.

The IFJ said that the resilience of South Asia’s media community is a testament to the state of press freedom across the region. But there are clearly major challenges. In the two weeks leading up to the launch of the report there were two more horrendous murders of individuals working to push the boundaries of freedom of expression in Bangladesh – blogger Nazimuddin Samad and editor Zulhaz Mannan. They are among seven journalists and bloggers killed in the past year under a ruthless killing strategy by fundamentalists and extremists.

Building on the 2015 IFJ gender and media research, this year’s report also documents the growing issues for women in the media in South Asia, with a particular spotlight on online harassment and trolling of women journalists. This focus outlines the experience of independent female media workers, harassed, intimidated, threatened and attacked for simply doing their job.

In the battle against impunity, there were several victories. Pakistan had a win against impunity, convicting the killer of journalist Ayub Khattak, while in Sri Lanka convictions were made and a trial began into the forced disappearance of political cartoonist Prageeth Eknaligoda.

The report, supported by UNESCO, UNDEF and the Norwegian Ministry of Foreign Affairs, is a key tool for advocacy on issues such as press freedom, impunity and gender equity in the media.

The IFJ added: “Despite the dangers, the journalists in South Asia are not only focussed on presenting the true story to the public, but also are also working equally hard to ensure people’s right to freedom of expression and press freedom. The journalists are taking their battles to the courts, streets and online space for advocacy and building unity and solidarity for campaigning on common causes.”

The International Federation of Journalists (IFJ)